One of our charitable pillars of giving is education. This means we’re committed to supporting charities and organisations that promote the education and development of young people – near or far.

Malindi Bright Future Academy is a charity-run school for children aged 13 and under in a rural area outside Malindi, Kenya. The students are given a first class, well-rounded education.

With many students living in huts with no running water, this level of education may not otherwise be available to them without the charity’s support.

We’re committing £5,000 to Malindi Bright Future Academy to go towards building a new classroom so they can continue and expand on the work they do for young people.

We spoke with Ruth Smith, founder of Malindi Bright Future Academy, to find out more about her and the charity’s story.

‘I set up Malindi Bright Future Academy in January 2015 with just five pupils and two staff members in rented premises, a few miles from the coastal town of Malindi, East Kenya.

During my gap year in 2014, I had done six months travelling around the world and six months voluntary work as an English teacher in a Jersey founded school, St Clement’s, down the road from MBFA, near the Sabaki river.

When I visited some pupils in the villages, I saw that many, many children didn’t attend school at all.

On visiting the three government primary schools in the area, I noticed many classes had 60-100 pupils in each class – the ones sitting right at the back were receiving a very poor deal!

As a teacher with many years’ experience, I’m a firm believer that education is power, I considered opening an early years school where children would receive good grounding before moving to a primary school at age seven.

The school grew very quickly (we now have 325 pupils and 15 staff) so it became obvious that we needed to cater for pupils up to year eight when they would sit their national exams before entry to high school.

‘The Friends of Malindi Bright Future Academy’ was registered as a Jersey charity in 2018 (no. 328),  to support the school financially by augmenting the teachers’ salaries, building new classrooms, providing a nutritious food programme, and supplying educational resources, including text books, teacher’s guides, story books, laptops, and visual and stationery aids.

The school provides the pupils with a first class, well rounded education, taught in the language of instruction, English.

We have a very low staff turnover and at the last national exams, MBFA came 9th out of 36 private schools in the area.

This was remarkable as during the height of the Covid-19 pandemic, MBFA was closed for five months. As many of our pupils live in traditional huts with no running water, no electricity, and earth floors, they had no access to the internet either.

Lessons continued in the form of photocopied booklets which were no substitute for face-to-face lessons.

Saltgate’s £5,000 donation couldn’t have come at a better time! I’ve wanted to own the site where our school was founded but after finding out that our landlord did not legally own the site, we made the decision to buy an acre of land, the size needed for registration, not far from our original site.

The pupils are being taught in temporary open sided tents (which they love as they’re so airy!) Building the new classrooms will start in the school holidays. Each classroom will cost £4,000, so Saltgate’s donation will build a classroom and equip it with the necessary resources , including laptops.’ 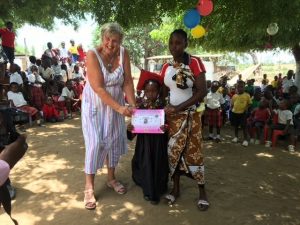 We’re thrilled to support Ruth and Malindi Bright Future Academy and we look forward to seeing the school’s growth and development in the near future.